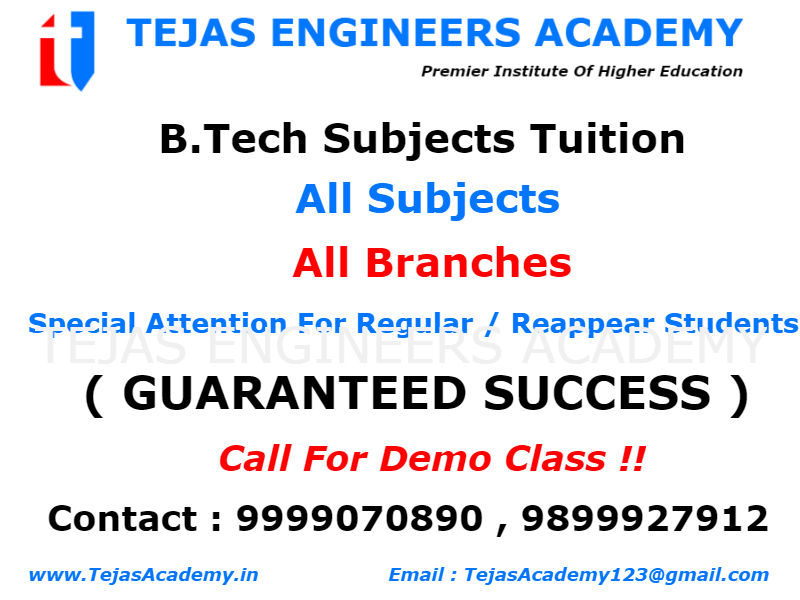 There are few quality B.Tech tuition institutes in Delhi giving all subject tuitions, most of the institutes are giving only part time tuitions to B.Tech students after 9 pm. School level institutes are ruining the fundamentals of the B.Tech students studying in top universities by giving them tuitions based on the school level fundamentals by just reading from the book. Such Institutes are giving B.Tech tuition in Delhi by home based teachers those were either jobless or involved in school level tuitions. They are ruining the fundamentals by attracting the students with an offer to complete the course in much less fees. But after reviewing students studying from such institutes it has been noticed that students are continuously getting more backlogs in the subjects studying from them. Students even told us that the subject for which they took coaching was worst than the subject they self studied. They also told that it had been better if they didn’t take the coaching from such home based teacher. We are giving B.Tech tuition in Delhi from last 15 years and in our institute we only cater B.Tech students of ECE, IT, CSE and EEE branches. We are not involved in any school level tuition. Students of MD University, IP University etc are finding it difficult to clear the backlog subjects this is because of the lack of practice by them. Students are citing that we understand the concepts but we are not able to perform in general in the final examination. We are the only B.Tech tuition institute in Delhi offering tuition batches for such student with a special attention toward the self practice of student. After evey one hour class we give a practice session to the student and keep in touch with them regularly and consult them for any help. Students are motivated to solve the difficult problem by themselves and it has been found that it increases their self confidence and rate of success as per our previous records. We are only B.Tech tuition institute in Delhi giving coaching with proper handwritten and printed notes of the major difficult theory and difficult subjects. Many B.Tech tuition giving institutes are focusing on one or two subjects like Maths and Physics etc, but we have a total spectrum of all the difficult subjects Like like Applied Mathematics, Applied Physics, Circuit Systems, Electrical Science, ADA, DSP, CA, DCS-1, II , CG, C++ , MPMC ,etc of all years. To book your demo class contact us 9999070890